I had a call from a good friend with a severely distressed daughter. She’s a very creative young lady, and relies on her late 2011 Macbook Pro for her work. Trouble is, it wouldn’t boot up. The Apple logo and the “ta-da” chime both announced that the machine was starting, but as soon as the login screen appeared, it was clear there was something amiss. The screen was covered in very thin red lines, almost as if someone had put it through a shredder! One could still log on, and the machine further raised one’s hopes by appearing to try to load the operating system, but then either the progress bar would stop at half way and go no further, or the machine would reboot as it got to that point. A bit like this (credit: Apple Discussion Forums): 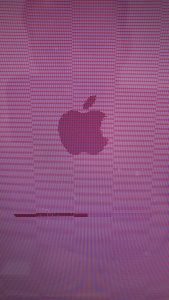 Note the pinkish tinge and the lines across the screen!

Now, I’m a Windows man through and through, and as I couldn’t get into the main operating system, the usual Windows fallback would be to boot into Safe Mode or Recovery Mode to do some troubleshooting.

Apple machines have a similar set of options, detailed here. Unfortunately, none of them worked. Safe Mode had the same symptoms as previously (in fact in hindsight I’m convinced the machine was on odd occasions trying to boot itself into Safe Mode and failing), Recovery Mode started but couldn’t offer me any disks to Recover, and not being a techy the daughter hadn’t thought to make any recovery media to boot from (but then, not many people think of that – maybe this should be the subject of a future blog post).

I couldn’t even boot from any of my trusty boot disks, as this was an Apple and as such wouldn’t sully itself by going anywhere near a Linux Live disk or Hiren’s Boot CD!

Now I’m a Yorkshireman, so I wasn’t about to spend my hard-earned if I could help it, and I called someone I knew with a Mac. I turned up on her doorstep on a Sunday afternoon with 32GB USB stick in hand (16GB would have been sufficient) ready to copy the .dmg file from her Applications folder. I forgot to mention that one of the other delights that Apple entertain us techies with is that you can only download a Mac OS image from Apple if you have a Mac running that current Mac OS version, or had used it to download a Mac OS image as part of an upgrade! Hence a 20-mile round trip to visit my friend with a Mac.

I had done my homework, establishing that yes, her Mac was about the same age, and so should have had an OS that I could use. Trouble is, when I got there I found that she had deleted the very image file I needed. AARGH!

Plan B – buy a bootable USB. I was pleasantly surprised that you can pick these up for less than a tenner on eBay, and despite the fact that I ordered it at about 3pm on a Sunday it arrived by courier on Tuesday morning. An hour or two later, I had a working OS running on the Mac. Not only that, but the daughter had inadvertently set up iCloud backup, so after a few calls to get her Apple ID, followed by a few more to get her to send me the 2-factor verification codes, we had a working machine. I toyed with the idea of keeping the bootable USB for future use, but then that good old Yorkshire spirit took over and I sold it to her at cost.

You might think that’s a happy ending – not so! See part 2 where the plot thickens with tales of corporate irresponsibility, class action suits and lots of disgruntled Mac owners!